As you can see, the new wordmark logo feels a little more round, for lack of a better phrase, with the 'a' and 'b' showing the clearest changes. The reason behind the change was to make the wordmark logo more mobile-friendly. It is not a redesign by any means, but rather an update. Every other Facebook logo outside of the wordmark, including the far more common standalone 'f' logo, will remain the same.

While Facebook's change is chiefly due to mobile-friendliness, the reasons for brands changing a logo can often be for far bigger reasons. Sometimes the changes even reflect the authority/dominance a brand has on a global scale. But even when a brand makes a small alteration to its logo, there are always those who notice (when Google changed the spacing of its second 'g' and 'l' in its logo, it didn't take long for people to notice the near-negligible change).

Let's look at McDonald's. The company originally started as 'McDonald's Famous Barbecue' in 1940, and went through several revisions in terms of name and logo from that point onwards. By 1953, the company had been renamed 'McDonald's' and, in time, a new logo seeking to reflect the multi-location chain was put together.

Contrary to some popular belief, the golden arches that now define the McDonald's brand are not the result of taking the 'M' from McDonald's. Rather, older McDonald's restaurants had this look as per below. 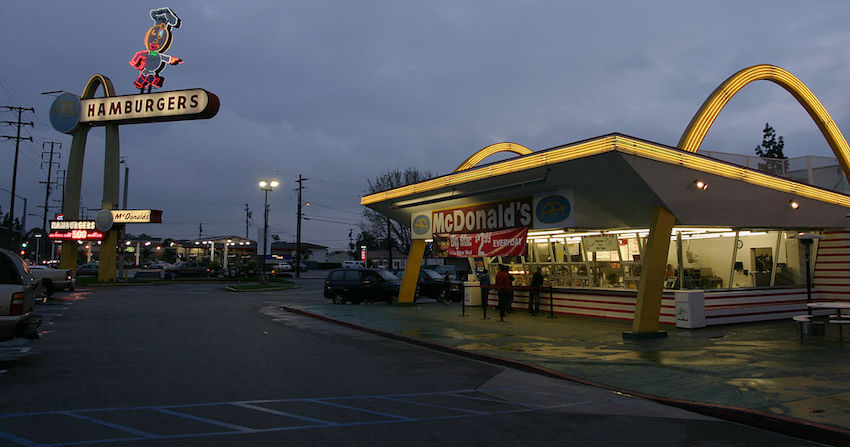 "DowneyMcdonalds" by Photo by Bryan Hong (Brybry26) - Own work. Licensed under CC BY-SA 2.5 via Wikimedia Commons.

When looking at the arches on old McDonald's restaurants from an angle, the two would intersect and form the 'M' style arches. The roofs of the restaurants were also incorporated into the first version of the now-famed logo.

Over the years, the McDonald's logo has gone through a series of refinements. The footing of the arches have been brought together to connect, the strike/roof through the arches has been removed, and the look of the 'McDonald's' wordmark has been revised, as well. While the McDonald's 'M' is more or less consistent around the world now, it does have slight variations on occasion. 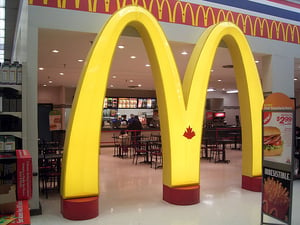 For example, in Canada the golden arches include a maple leaf situated in the centre, some European McDonald's sport a green backdrop to denote an eco-friendly approach to the company and, more recently, new McDonald's restaurants tend to forego the use of the 'McDonald's' wordmark, due to the knowledge that the golden arches are so iconic that almost everyone knows they're looking at a McDonald's.

For the latter example, other major brands have also progressively dropped their wordmarks and opted for more visually-driven logos as well. Starbucks is one such company. For 40 years, the coffee chain kept 'Starbucks' in the logo, from its beginnings in Seattle up until 2011. Then, the company ultimately dropped the wordmark and, instead, opted to keep the logo featuring the siren. For companies such as McDonald's and Starbucks, they can make bold moves like this as their brands have become universally recognised.

Any change that is made to a logo, however seemingly minor, can impact how your brand is perceived. If people can pick up on slight changes to Google's logo, then people will undoubtedly notice when your logo and branding is significantly altered. The response will naturally be either positive or negative (or some shade of indifference), and you have to be prepared for these responses. If you're looking at a major redesign of your logo, do some research and perhaps see if your current clients/customers are in favour of the proposed changes you're considering.