The dangers of overhyping a product

When it comes to promoting a new product or service, there's a fine line between creating a buzz and creating an unwarranted amount of hype.

The key issue with excessive hype is that it results in massive expectations among prospective buyers. In today's blog, I'll be showing you some examples of when business's overhyped their products (and even their own brands), leading to unwanted results.

In regards to marketing and advertising, the hype you create around your next product or service (or other brand-related changes) can substantially shift people's expectations of what's on offer. If you hype your product/service up as being an absolute game changer, people are going to expect something that will quite literally change the nature of what your business is or what it does. That's the reason it's called a game changer.

You may recall that back in 2013, Domino's Australia teased its own game changer, toting it as the biggest announcement in the chain's 20-year history.

And what was the end product of this hyped 'game changer'? The introduction of premium toppings and square bases (aka the Chef's Best range). This underwhelming product upgrade became the target of criticism and mockery among people across social media, leaving Domino's embarrassed. It by no means hurt the business, but it was a considerably overhyped campaign for a few new pizzas.

Whereas Domino's 'game changer' campaign may have only led to a few bruised egos, there are times when the hype you create around a product can lead to a far larger fallout. This is what happened with the Ubisoft video game Watch Dogs.

When developer/publisher Ubisoft unveiled its first piece of gameplay for Watch Dogs, the product it showed off was one possessing a level of detail not before seen for an open world game. The gameplay itself was fluid, exciting, and the action not unlike what you'd expect from a Hollywood film.

Two years later, Watch Dogs released with some notable downgrades, particularly in the graphical department. While the final product was by no means a bad video game, it was the very embodiment of a company making grand promises, only to then fall drastically short of the mark. 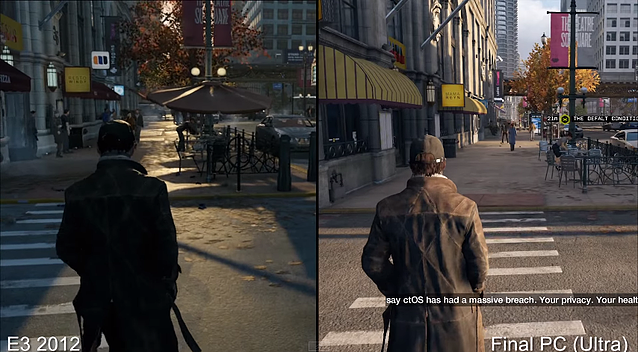 A large number of outspoken gamers were angry, posting up videos of gameplay on YouTube - some of which focused on illustrating the clear graphical downgrades, and others that were montages of the numerous glitches and gameplay issues. Gaming forums also had their fair share of gamers venting their frustrations towards Ubisoft for presenting the product in a way that they perceived to be deceptive.

While hyperbole is not a foreign concept when it comes to video game discussions, the anger felt by gamers was justified to a certain degree. Over the two years Ubisoft marketed Watch Dogs for, a large chunk of the gameplay that was shown supported the idea of an open world game with gorgeous graphics and stellar gameplay. Then, only a month or two from release, the graphical downgrades became evident.

When grilled about whether or not Watch Dogs had suffered a graphical downgrade, the game's director Jonathan Morin denied this was the case - despite clear evidence to the contrary. While the game still sold well, it caused a substantial amount of distrust to form between the gaming community and the company itself. When you depend on the gaming community for success, overhyping and undelivering can be a dangerous act.

The above two examples show how overhyping a product or service can backfire. But even though Domino's and Ubisoft are massive businesses and are therefore more susceptible to a public fallout, needless hype can be bad for a business of any size. The key is to create a positive buzz around your brand and any new products or services. Buzz is good, but promising the world and then underdelivering is not.

Even if you just think of major brands that can fall foul to their own image, such as Apple and the 'Bendgate' controversy of the iPhone 6 Plus, hype is something that goes beyond a marketing level. You also need to control your brand image in a way where people don't have unrealistic expectations of what you can create/offer. Yes, it's your aim to provide a stellar product or service, but that does not mean you're immune to mistakes or falling short from time to time.

To a certain degree, the people behind Apple have pidgeon-holed the Apple brand. By rarely admitting to mistakes, charging premium prices for their products, and implying they're superior to competitors, people expect perfection from the company. So when an iPhone 6 Plus bends or an iOS update renders some people's devices almost useless, the illusion of Apple's perfectionism is broken - and the company can no longer successfully sell its own hype.

Across the board, you need to control the buzz you create around product/service announcements, as well as the image you create for your brand. Avoid game changers that aren't actual game changers, don't oversell the idea of a new product or service, and don't imprison your brand to a single idea that could only serve to hurt it in the long run.

Margin Media is an inbound marketing company based in Brisbane. We offer a range of digital solutions to help your business increase its website traffic, qualified leads and customer base. To find out more about our services, visit our home page.