Smartphone Showdown: Everything You Need to Know About Samsung’s New S9


The Korean manufacturer announced on February 25 at the Mobile World Congress in Barcelona that their new S9 and S9+ smartphones would be released in the UK on March 16. The release sees the brand’s flagship smartphone looking to overtake their traditional rival Apple, following the release of their iPhone X in November last year.


With the iPhone X welcomed into the market with open arms, Samsung can only hope the extra few months worth of technology in the S9 is enough to convert some mobile users.

While Samsung’s latest offering is difficult to distinguish design-wise from its predecessor; the S8, it’s clear the emphasis was less on remodeling, more on refining. The new line features two variants, the S9 and the S9+ which boast 5.8 inch and 6.2 inch Super AMOLED screens respectively and while the design changes may have been minimal, they do offer a point of difference for consumers.


When the first images of the iPhone X were released, fans revelled at the edge-to-edge display, however once the phone was in their hands, consumers were quick to point out the “notch” at the top of the screen. The notch caused an array of mixed emotions from Apple users and Samsung seems to have taken note.


In the case of the S9 and S9+. the camera and microphone have been cleverly hidden within the top border, making for a more clean look overall, but it’s what Samsung has done with that camera that warrants excitement.


There’s no denying that camera quality sells phones nowadays, and the iPhone X took this notion to its absolute limits. Samsung’s response attempts to take this one step further, announcing that their latest run of smartphones “revolutionises phone camera technology”.


The ISOCELL tech allows for low-light shooting, a new feature for the Korean manufacturer, the camera itself is now smaller and features and auto-focus setting and adjustable aperture settings, switching from f/1.5 to f/2.4, the first camera of its kind on the market.

That being said however, Apple still has a leg up on the competition due to its dual camera on the back and portrait mode for both front a rear facing cameras, a feature only available on the more expensive S9+.


While much of the focus has been on improving the camera, Samsung has not neglected the technology under the hood. The new S9 features a Exynos 9810 chip, 4 dual core processors and support for 4K UHD video playback and recording.


It also features 4GB of RAM for the S9 and 6GB for the S9+ compared to the iPhone X’s 3GB and boasts a slightly higher on-screen resolution and pixel density. Here is a rundown of how it compares to Apple’s iPhone X.


When Apple first released the price points for their tenth anniversary edition iPhone X, it had some consumers recoiling in shock, with costs starting at over $1500AUD. Samsung on the other hand, has released pre-orders for the S9 starting at $1199 AUD, causing quite a stir amongst the tech community.


Some have speculated this is due to the smaller memory size of the S9 compared to the iPhone X and while the S9 doesn’t come in the larger 256GB model, it does have a MicroSD card slot that allows for up to 400GB of extra storage. 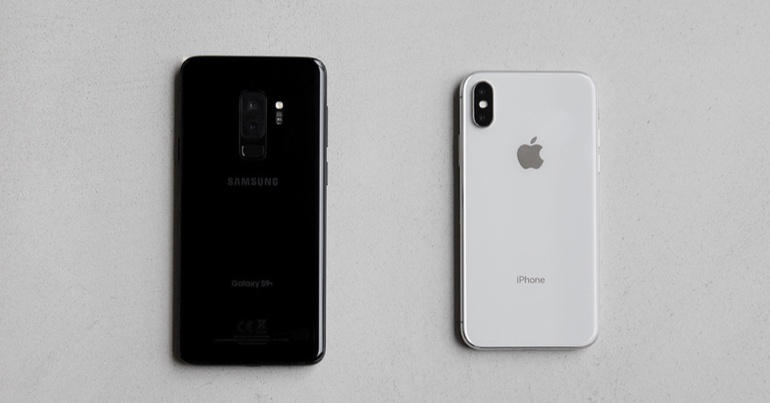 
There no question that smartphone users are spoiled for choice when it comes to the latest tech. Apple’s iPhone X set the bar high and Samsung has seemingly responded swiftly, but until the S9 is officially released in Australia, how can you be sure? Tests have indicated that on many fronts, the S9 holds its own against the Apple juggernaut and in some categories, basic speed and design, far exceed that of the iPhone X.


For the past few years, Samsung has struggled to gain sales traction in an Australian retail market dominated by Apple, but with a teched-out new line and far more affordable price-tag, some consumers may be up for a change.


What do you think? Time to throw in your old Apple mobile phone and move to Samsung?