How do you define 'real'? The Oculus Rift and virtual reality's future 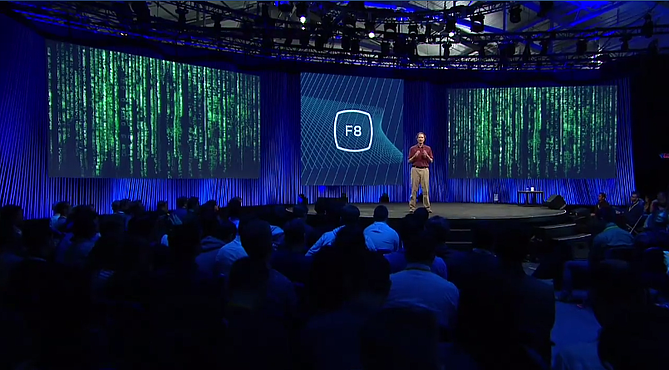 Of the numerous announcements made throughout Facebook's F8 Developer Conference, discussions surrounding the Oculus Rift were among some of the most intriguing.

When Facebook CEO Mark Zuckerberg discussed how both normal videos and spherical videos (those that allow you to explore a scene in full 360°), it was a nod not only to the growing popularity of video on the social media platform, but also the future of how we can experience environments by being in complete control of the video we're viewing - and how virtual reality (VR) such as Oculus VR's Oculus Rift can make said experiences more immersive.

This statement by Zuckerberg was complemented the next day when the Oculus team officially took to the stage to discuss and demonstrate the future of VR and how the Oculus Rift fits into this scenario.

If you have some time (an hour spare), the presentation regarding virtual reality at the F8 Developer Conference can be viewed here in its entirety. If not, then some of the key points will be listed below. Suffice to say, if you are someone who has a strong interest in VR, the presentation is certainly worth checking out.

When Oculus VR's chief scientist, Michael Abrash, took to the stage, he almost immediately began his speech by acknowledging the hard road VR has faced in the past, how this time will be different, and summarised the power of VR by quoting a scene from The Matrix where Laurence Fishburne's character, Morpheus, discusses the nature of reality.

"What is 'real'? How do you define 'real'? If you are talking about what you can feel, what you can smell, what you can taste and see, then 'real' is simply electrical signals interpreted by your brain."

Abrash then discussed, at length, how our brains interpret reality, both in the virtual and actual worlds, and how the Oculus team has been making significant progress in being able to essentially trick the brain into thinking a virtual world is the real world. The benefit of such a deception? It mostly comes down to immersion.

Prior to Abrash coming on the stage, Facebook's chief technology officer, Mike Schroepfer, addressed a question many had been asking regarding Facebook's acquisition of Oculus VR: "What the heck does [virtual reality] have to do with Facebook?" While one of the key functions of the Oculus Rift will be the gaming space, it also has the potential of offering immersive experiences such as the aforementioned spherical videos, exploring currently unreachable and uninhabitable landscapes (e.g. walking the surface of Mars), and to experience moments with your friends and families as if you were actually there.

So what does this mean? Well, it essentially means Facebook wants to 'teleport' Oculus Rift owners to new worlds or to where their loved ones are - even if entire oceans separate them. Imagine, for example, video calling a loved one with VR. While a somewhat basic example, the sense of immersion offered by a VR headset would make the experience feel more real. Or what if avatars of both of you could be created and you explore a part of the world together in a virtual state? To some it may sound cheesy, but to others it may be a truly unique and absorbing way to see one another.

Besides some misinterpreted comments made by Schroepfer, there is still no clear release date for the Oculus Rift.

During his time on stage, Abrash noted that there were four key areas the Oculus Rift could be improved in the future: haptics, visuals, audio, and tracking. In terms of visuals, this could include graphical/processing improvements, as well as increasing the field-of-vision (it currently sits at 90°, while humans have a 280° field-of-vision). For audio, this comes down to focusing on not just better audio fidelity, but also being to more effectively cancel out external noise.

When it comes to tracking, Oculus Rift users are limited by how much space they have to move around. Currently, Oculus limits you to moving in a 1.2 metre by 1.2 metre space, while some competing VR products permit what is essentially a living room's worth of moving space.

One area Oculus hasn't nailed down is how a user gets to fully control the product (besides movement tracking, of course). For the time being, much of it comes down to personal preference, such as someone's preferred gaming controller/pad. However, Abrash expressed a clear interest in improving haptic (touch-based functionality) over the coming years. And this won't just be in terms of having things to reach out and touch, but having the Oculus Rift provide physical feedback regarding your actions. Again, this is all for the sake of greater immersion.