The Polarisation of Social Media: Should Marketing Get Political? 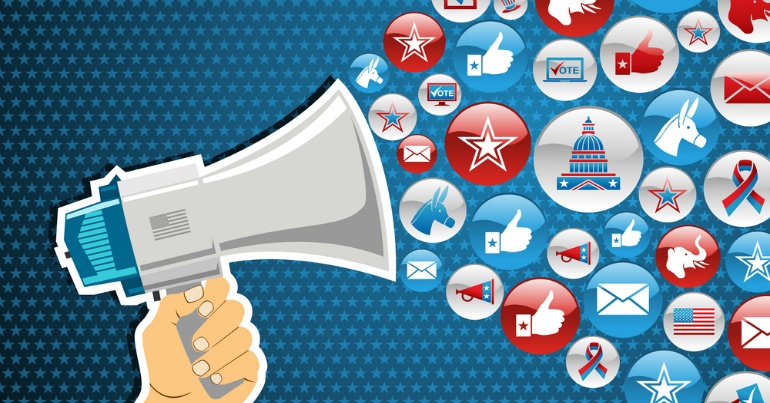 Marketers tend to avoid mixing politics and business in fear of backlash and alienating certain consumer segments, and that tightrope walk has been made trickier by social media marketing.

Through the phenomenon known as homophily - the tendency for “birds of a feather flock together” - like minded people form clusters across social media, essentially dividing us into groups within virtual tribes based on our ideologies and opinions.

According to Niall Ferguson, a study of 665 blogs and 16,852 links between them revealed a dichotomous tendency that formed two separate clusters: one left wing, the other right wing.

A similar study of Twitter found the same tendency of seeing politically left or right people only retweeting their own ideological views. It also seems that the most extreme tweets, or tweets that use emotional or moral language, are more likely to be retweeted.

The 2016 U.S Presidential Election saw a hyperinflation of polarised opinion with vast numbers of fake news stories and opinions saturating Facebook, which led to The Facebook Apocalypse.

This divisive political climate sees brands face unprecedented challenges when engaging with consumers on social media. The reach, ubiquity and viral nature of social marketing places brands under the microscope as they try to navigate current polarised and controversial conversations.

And sometimes they get it wrong, as shown by Pepsi’s Kendall Jenner disaster or McDonald’s Women’s Day marketing campaign.


However, for every Kendall Jenner disaster there is a Heineken commercial or State Street Global Advisors event that align their message brilliantly; proving brands can form connections with consumers through meaningful conversation and be involved in the political discussion.

In fact, a recent study by Sprout Social revealed that nearly 70% of consumers surveyed felt that brands should become more political.

The results of Sprout’s study go against conventional wisdom, suggesting savvy brands can be rewarded for communicating authenticity by joining the political arena.

Consumers believe it’s important for brands to take a political stance, particularly on issues such as civil rights, race relations and immigration.

But what makes these findings counterintuitive is the space consumers wish brand identity would become more political in: Social Media.

But Sprout Social’s study found 66% of consumers want brands to take public stands on political issues and 58% have no problem for it to happen on social media.

So it would seem brands have two choices: One; remain apolitical and go against the consumers political desires, or, two; take a political stance and face the dichotomous vitriol of social media. Both options don’t appeal to brands marketing on social media. Yet, it might not be as bad as we think.

It appears that while ideological clusters engage with politics in marketing differently, engagement is not necessarily detrimental to brands taking a political stand.

Marketing politically also showed to have more reward than risk. The most common emotional reactions to brands taking a stand were positive, with consumers’ top reactions to politicalization being intrigued, impressed and engaged.

So now might be the time to rethink your approach to politics in marketing.

Strategising politically is not only a way to navigate unavoidable and contentious discourses dominating social media, or to affect real social change in the world, it is the inevitable desire of upcoming consumer segments: Younger consumer sets are demanding for more politically-active brands.

According to a 2015 study by Cone Communications, 91% of Millennials would switch to brands associated with a cause, and Gen Z want more multiculturalism and progressivism in their marketing. But remember, it is important to tread carefully and authentically when promoting your values.

If done correctly, your politicised brand identity can be the cornerstone to your marketing strategy.